Costanza elected to the Council of Coni Umbria

A memorable day for our team and for the world of equestrian sports.

Today, March 13, 2021, our Costanza Laliscia was elected at just 21 in the Council of Coni Umbria to represent the athletes.

Her name is the only novelty in the shortlist of six elected in the council, but not a surprise: despite his young age, Costanza has been a point of reference for equestrian sports for years.
It is the first time ever that an athlete from the Italian Equestrian Sports Federation holds this position, which makes the event even more significant.
The elective assembly, chaired by Luciano Rossi, confirmed as President for the third consecutive term General Domenico Ignozza and defined the council which is composed as follows:

The President: “We will start again and Umbria will be ready. Sport will be the driving force for recovery at all its levels, from small athletes to the greatest”

Congratulations Costanza and good luck to all! 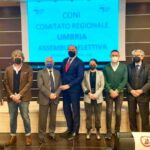