Fuxiateam still protagonist and as always full of sound of victories. This was also the case in Fontanafredda, in the province of Pordenone, where the riders of the President Simona Zucchetta made a double doblete of great quality. 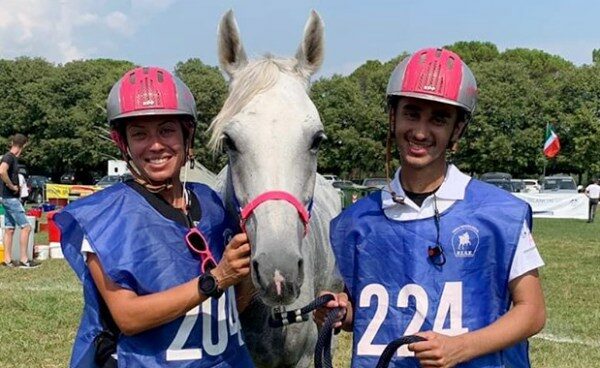 The first satisfactions were those given by the emirati rider Saeed Khalifa Saeed Sulaiman, who on Assim Du Barthas won the CEI1 * at the average of 17.910 km/h, crossing the finish line with Carolina Tavassoli Asli with Cold Ayre for an embellished double win few minutes later from the victory by Assim du Barthas of the Best Condition award. The two pairs of Fuxiateam dictated the rhythm from the first to the last kilometer, ending up creating an unbridgeable margin for the rest of the riders.

The Saturday to remember was completed by the performances offered in the CEIYJ2 * by Federico Valeri, at the debut in the Fuxiateam after having shown up at the April Masterclass of Italia Endurance Stables & Academy, and Costanza Laliscia. Head-to-head from the start, even in this case with Federico who, riding Cross Flow, won 17.964 km / h in the last 5 kilometers and taking full advantage of the cover offered by Costanza, which won the Rosebrae Oasis second place with a wide margin on the Argentine Camila Rodriguez.

Saeed Khalifa Saeed Sulaiman: “It was really a pleasure to win riding a horse of great quality and well prepared as Assim du Barthas. The sensations I received from having a stable like the Fuxiatem, which I cannot but compliment for capacity and professionalism, are equally beautiful”.

Federico Valeri: “It was a fantastic day, crowned by a victory I will never forget. To begin with a first place is not a trivial matter. The emotion was very great, even more beautiful because it was shared with a special and unique group like that of Fuxiateam”.